Mom started sweating profusely and complaining of shortness of breath and became very disoriented this afternoon.

It scared us enough to call an ambulance to take her to the hospital to make sure she wasn't having a heart attack.

In that moment, I felt torn not knowing whether to join her in the ambulance or pack the kids into the minivan.

Luckily my brother got there just in time to climb into the ambulance with her, and his girlfriend volunteered to stay with my kids so I could follow.

Still waiting on the doctor.

So far they've done an EKG, chest X-ray, chest ct and a lung ultrasound and have ruled out a pulmonary embolism which is good.

It's starting to look like she may have a lung infection and so their starting her on antibiotics for now.

They've officially admitted her so they'll probably keep her for a day or two we'll see. 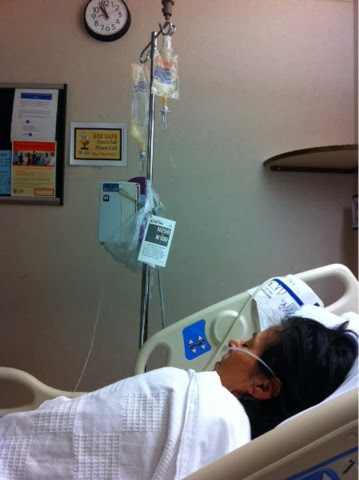 Hasn't even been 24hrs yet and she's already trying to convince me to take her home for the past hour because she's feeling better already.

If only I could take the oxygen and antibiotic drip to go at 4 in the morning wouldn't it be nice?

Doctor just let me know she has Pnemonia and they'll most likely end up keeping her for the next 3-4 days.:-(

Different doctor comes back and saids she does not have Pnemonia and they'll be sending up a pulmnologist and cardiologist up to speak to me.

So after a long sleepless night of twice an hour vitals my mom's blood pressure has finally stabilized.

I have absolutely no explanation for yesterday's occurrence as of yet.

One minute she was fine and then in the blink of eye, rapid response was being called and a crash cart was being brought to the room "just in case" while my sister was being asked mom's directives which are in her words to be kept alive by "all measure's necessary" in case she were to code.

I can't begin to describe to you the angst or guilt I felt in not really preparing you for this moment.

But I have to say when staring in the face of adversity, as usual you absolutely held your own and made me so proud.

Meanwhile I'm 20 minutes away receiving a panicked call from the nurse telling me mom's bp has dropped pretty drastically to 70/40 and they'll be transferring her to the ICU If it continues to drop.

Time like in a movie stood still as I played out all the worst case scenarios in my head.

Unable to leave little Vicky to rush to the hospital, I spent the next 1/2 hour calling all of our immediate family to let them know this might be it.

As I drove through tears, I made a pact with god as I often do these days promising this for that, if only he gave us more time.

Family rushed from all over the city to gather in her room while she slept, just  hoping her bp wouldn't drop any further. 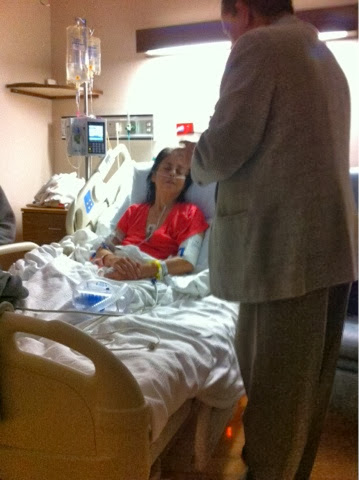 I had the kids picked up and brought to the hospital to see her because as crazy as it may seem, If this was it, I didn't want the last memory they had of mom to be one of fear when she was rushed to the hospital in an ambulance.

She was awake periodically last night for a few minutes at a time but long enough to hug and kiss the kids and exchange I love you's. They wouldn't allow Ellie in at first, an hour and several phone calls later to everyone from the doctor to the hospital admin they finally let her come in, which definitely perked mom up for a bit.

So here we are today and although her bp isn't exactly where we want it to be it's getting there and she's gotten up once or twice so far and seems to be doing a little bit better then yesterday. She just keeps saying she isn't ready to go yet because there's no way she's letting us get off that easy without having to take her to the casino for her birthday next month.

They just wheeled her down for several more tests and an Echo giving me some time to give you more of a detailed update.

Pulmnologist came into the room and told me she does have Pnemonia.

All I can say is "Wow, people are you sure or am I just being punked?